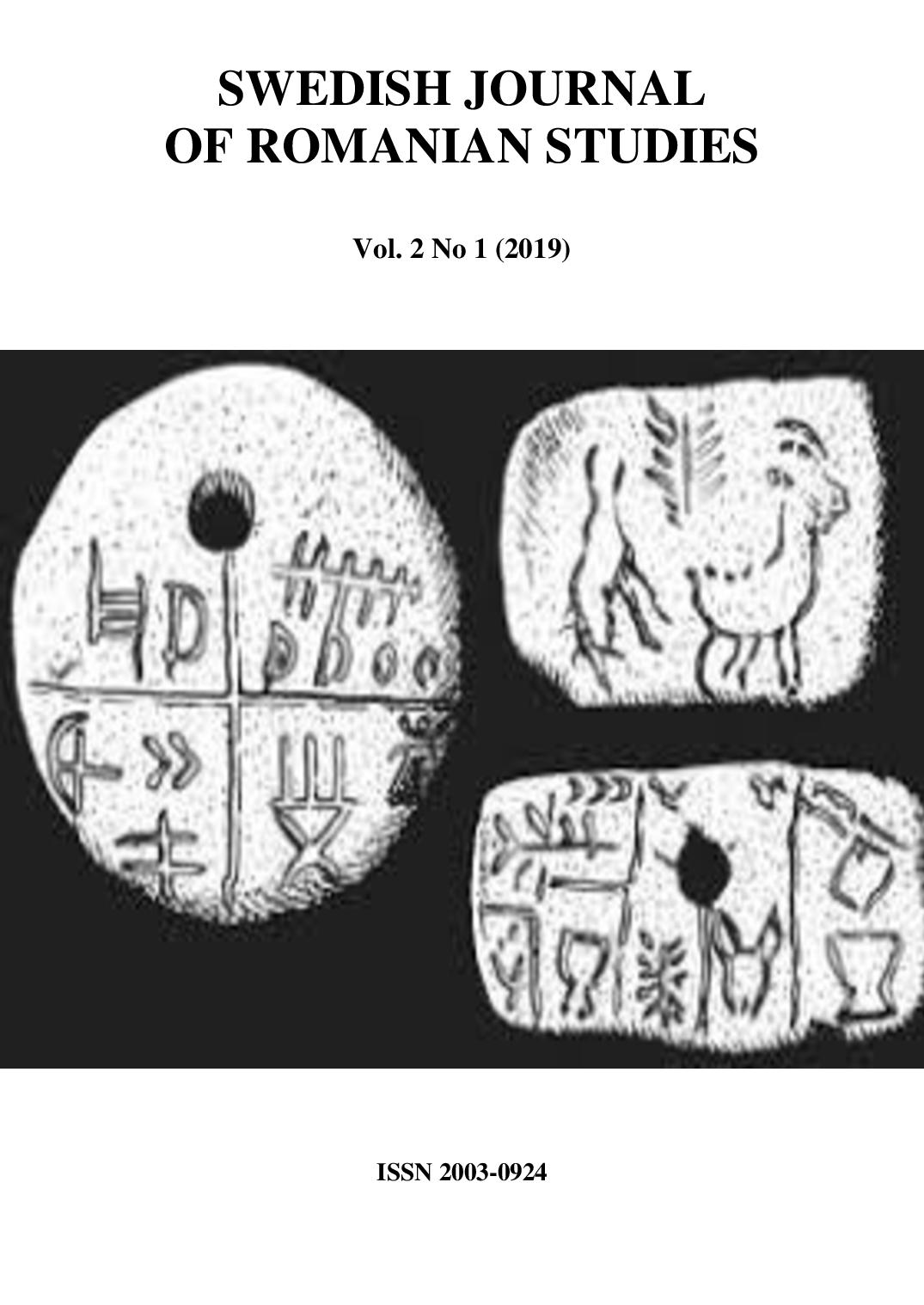 In the second volume of Swedish Journal of Romanian Studies we are delighted to welcome ten articles and four book reviews on Romanian language, literature, translation, culture and theatre, written in English, French or Romanian, by academics from various traditional universities.

Literature section is illustrated by authors with affiliation to The “A. Philippide” Institute of Romanian Philology, Iași, Alexandru Ioan Cuza University of Iași, and West University of Timișoara. The articles advance novel insights when inquiring into enticing subjects such as: the bodily community and its representations in the common space of the members of Viața românească literary group, analysed through Roland Barthes’s and Marielle Macéʼs theories; the remix of hajduk fiction in the nineteenth and early twentieth-century Romanian literature, conveying a modern lifestyle; the exile and nostalgia for the native lands in a comparative reading of the works of two seemingly unrelated writers: Andreï Makine and Sorin Titel, both of whom revealed to undergo a pilgrimage to reinvent themselves.

Translation studies is a perfect ground for “1 Decembrie 1918” University of Alba Iulia to present a paper dealing with a view on the concept of fidelity in literary translation with an analysis of the Romanian poet Mircea Ivănescu’s work on the overture of episode eleven, “Sirens”, from James Joyce’s “Ulysses”. The paper is not intended to elicit the imperfections of the translation but rather to illustrate the intricacy of the task, the problems of non-equivalence that are difficult to avoid by any literary translator.

Theatre section benefits from the original intuitions of academics from National University of Music Bucharest and Military Technical Academy, Bucharest, concentrating on modernity: the importance of the Romanian theatrical project – DramAcum, as a new type of theatre and dramaturgy, within the larger European influence of the verbatim dramatic style performed in theatres under the slogan of the in-yer-face; staging O’Neill’s Hughie by Alexa Visarion makes way for an investigation of several drama reviews that discuss the play’s first night, revealing that the performance was a successful attempt at communicating and debating the conflicted values of American pragmatism and equally a crowning of the Romanian director’s effort to unfold the “anti-materialism” and the fatalistic approach to existence of the American playwright.

Owing to University of Bucharest in Cultural studies we witness the reconstruction of the attitudes of Romanian peasants towards the vestiges of prehistoric material culture, finding out what people thought about the origin of prehistoric artefacts and what meanings were associated to them.

In the Linguistics section thanks to Alexandru Ioan Cuza University of Iași, Ss. Cyril and Methodius University of Skopje, and Lund University we are introduced to three perspectives on Romanian language: the destiny of the Latin in the East is interpreted through the pastoral character of Romanity, which led to a population mobility that influenced the language at diatopic level, with a focus on the transhumant shepherds whose travels played a linguistic levelling role, despite the territorial spread of the language; the modern French impact on the Romanian language (the redefining of the neo-Latinic physiognomy of the Romanian language) is detailed from a chronological perspective, the influence of French language being considered from a linguistic perspective, but also with a view to the various social circumstances; last but not least, we are proposed a plea in favor of a linguistic updating, namely the acceptance into the literary language of feminized denominations of professions.

Due to University of Oradea, Technical University of Cluj-Napoca, and University of Craiova the Book reviews section engages: a tome written by Paul Cernat, an essential study for those interested in the phenomenon of the Romanian avant-garde; a book by Carmen Mușat, which analyzes and systemizes the relational character of literature and the discourses on literature, a plea for the theorist and his presence in the world, retaining a valid purpose; a volume proposing multiple interpretations, in which Carmen Dărăbuş traces the (evolutionary) trajectory of male characters, by highlighting the permanent capabilities of metamorphosis of the primordial pattern; a literary magazine bringing into attention of the contemporary readers the cultural activity of the Romanian intellectuals from exile, with a focus on Camilian Demetrescu.

Swedish Journal of Romanian Studies is published in collaboration with Centre for the Research of the Imaginary "Speculum", "1 Decembrie 1918" University, Alba Iulia, Romania, and welcomes contributions from scholars all over the world.