Norse World (uu.se/norseworld)[1] is a digital resource created by The Norse Perception of the World project[2] for researchers, students and the public to explore the spatiality of medieval vernacular literature from Sweden and Denmark. The project, consisting of Principal Investigator Jonathan Adams and co-Investigators Agnieszka Backman, Alexandra Petrulevich and Simon Skovgaard Boeck, is funded by Riksbankens Jubileumsfond Infrastructure for three years, 2017-2020.

The starting point for the project is looking at East Norse (Old Swedish and Old Danish) literature as a mine of information on how foreign lands were visualized in the Middle Ages: What places were written about and where? Are some places more popular in certain text types or at certain times? How do place names link different texts? Is there a shared concept of spatiality? How is space gendered?

For the purposes of this project, the texts consist of devotional works, such as legends, miracles, prayers, dreams, visions, and revelations; poems; encyclopedic and didactic works such as proverb collections, drama, sermons, and pilgrim guides; romances; chronicles, histories, and travel tales. We have excluded charters, diplomas, law texts, and Biblical texts as they are already in the process of being published (charters and diplomas), contain few foreign place names (law texts), and do not demonstrate a specifically Scandinavian view of the world (Biblical texts). We have also excluded Viking Age runic inscriptions as they do not stem from the medieval cultural situation.

As what is considered ’medieval’ can differ from country to country, we define the Middle Ages for the purposes of the project as 1100-1515, with the cutoff year of 1530 in the case of medieval texts only extant in slightly later copies, e.g. Historia Troiana. These dates correspond to when Old Swedish and Old Danish were used.[3] The sources range from medieval runic inscriptions (only three), to about 190 manuscripts including fragments and about 20 early prints (exclusively in Old Danish).

We uncover the perception and knowledge of foreign lands – in the context of the project: everything outside of the modern borders of Sweden and Denmark – by extracting place names (e.g. Egipterike ’Egypt’) and other non-name spatial references (e.g. ryz ’Russian’) from the texts.[4] When possible, we assign spatial references coordinates, using GeoNames[5] or IDAI[6] as our main sources, which is called geocoding. Some spatial references have no coordinates, because of deliberate textual vagueness, e.g. ‘Foreign land’,[7] others can only be localized to a general area, e.g. the Biblical town Emmaus,[8] and some are simply fictional, e.g. the city Apolis.[9] The spatial references are then visualized on interactive maps, with an emphasis on frequencies. All instances of a spatial reference are plotted and can be explored through a detailed view by clicking the spatial reference.

The data is stored in a modified MySQL database built to fit the structure of our data and the research questions we imagine the resource could be used to investigate. Leaflet, an open-source JavaScript library,[10] is then employed to create interactive maps in order to visualize the data. The database communicates with the public website Norse World, and the admin interface for data input, through a REST-API, which uses JSON as its open standard format and is compatible with both GeoJSON[11] and JSON-LD.[12]  The data is shared under a Creative Commons Attribution 4.0 International License.[13] It means that you are free to share and adapt the project's data and other material as long as you credit the project. It is also possible to download the data as .csv file, which can be used in offline GIS applications, such as the open-source program QGIS.[14] Through the map interface you can make queries either using filters or free text search in the search bar. The filters range from contextual, e.g. manuscript/dating/language, to linguistic and onomastic, e.g. preposition and categories of names. 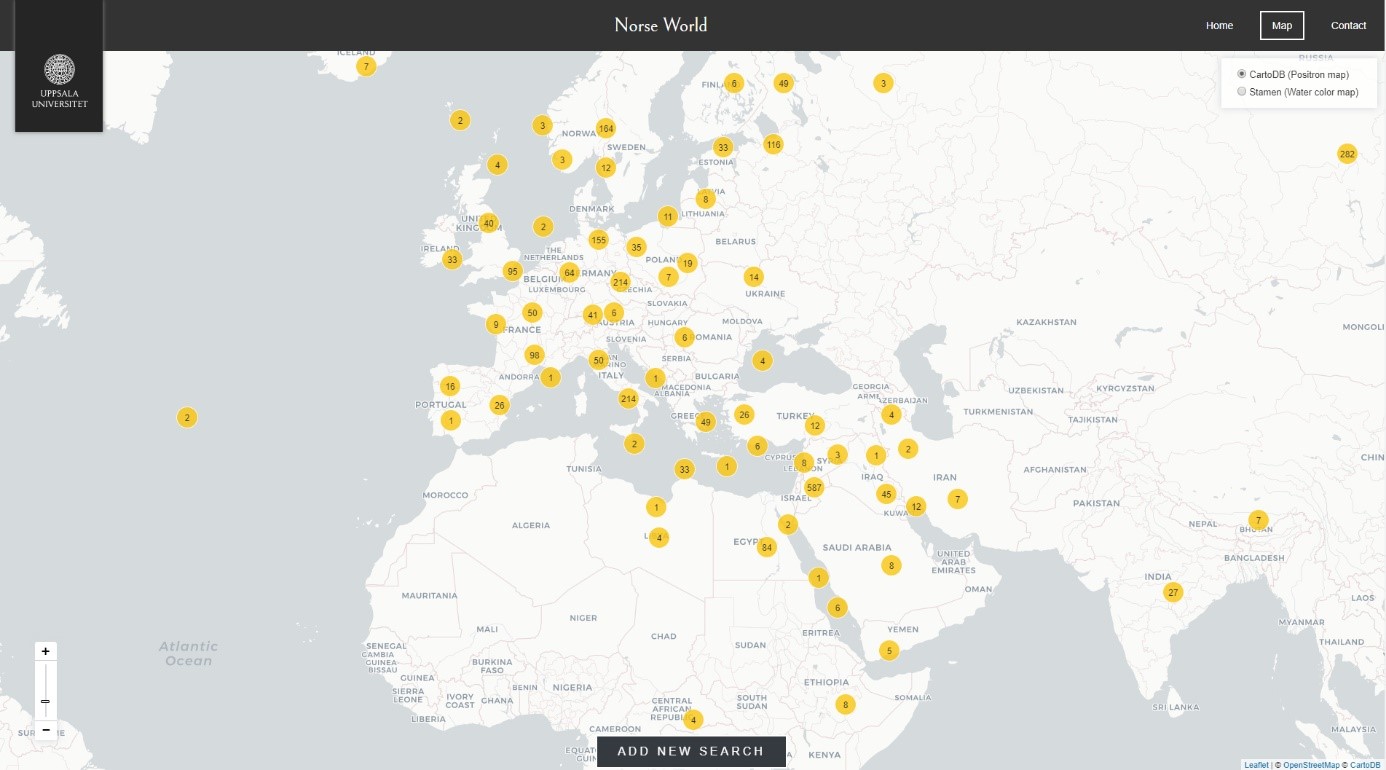 As the starting point of the project is in text philology, different forms of place names and non-name spatial references constitute the core of the data. At the heart of the data structure is an original form that consists of a spatial reference with its immediate textual context. The original form has information attached relating to where the quoted piece of text can be found: i.e. the type of source (runic inscription, manuscript, or early print) and edition, page number and work. It also shows different levels of normalization for the original form’s place name or non-name: variant form, lemma form, and standard form. Finally, the level of certainty of the identification of the spatial reference and/or reading of spatial reference may also have a note with information important for interpretation. Coordinates are connected to the standard form, which also contains categorization of the spatial reference, e.g. type of name. Altogether this constitutes an attestation; for an example using omot longobardorum konung, see figure 2 below. For more information on the structure and metadata, see the project’s website.[15]

Visualizing the data through interactive maps and spatial analysis is a way for the project to open up our resource to other fields of study,[17] but there is some inherent tension. By geocoding all identifiable spatial references in the texts they can be visualized and used for spatial analysis. It is also a potential drawback when applied to historical materials as specific coordinates are imposed on a material that is, firstly, ambiguous in nature and, secondly, not created within the modern concept of space imagined as a coordinate system. In some ways, we have no idea where (if at all) medieval people located the places corresponding to the spatial references in the corpus. 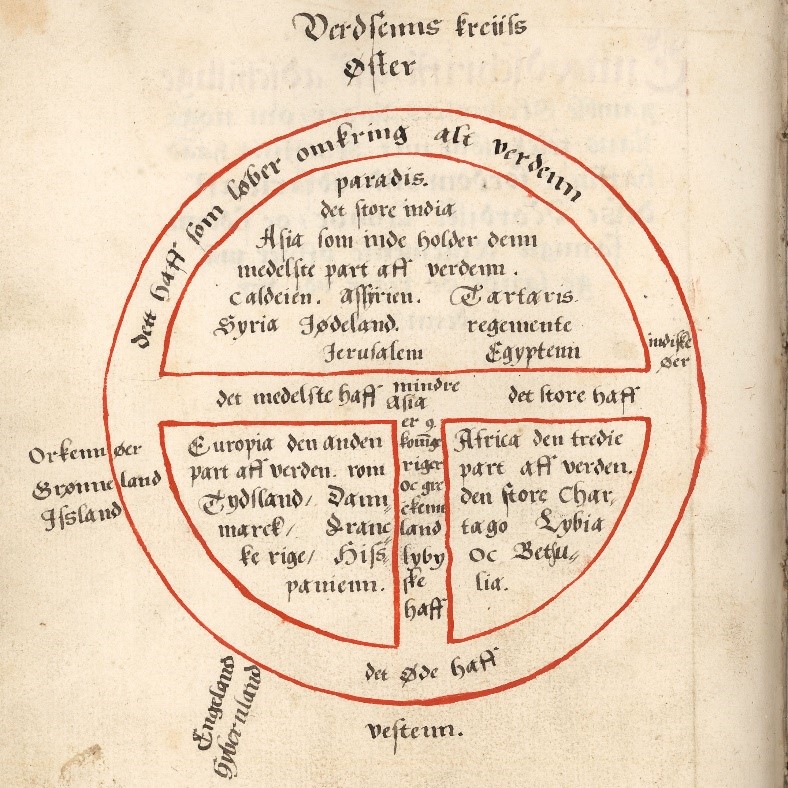 The T and O world maps, also called mappae mundi, have often been proclaimed as accurate depictions of the medieval world view but this position has lately been challenged. Rather, it has been argued that they should be seen be a representation of the structure of the world. These maps are often found in manuscripts under the heading “geometry”, a category often containing information on place names and the proportions of the world.[18]

A good case can also be made for geographical and spatial knowledge in the Middle Ages being textually coded instead of visually.[19] Medieval literature contains written maps in place of drawn ones. A protagonist often moves from one place to another in a linear manner. Spatial references and text thus form an inseparable whole, where the spatial reference helps structure and bind together the text in question. Spatial references are also a part of what helps link different versions of the same text or different texts. For instance, a spelling of a place name using f instead of an expected v may point to a Low German source, showing connections across languages and regions. Thinking visually about location-based data can be seen as a contemporary norm as this type of thought in a way contradicts the textually coded spatial and geographical information in medieval literature. At the same time, transforming textual spatiality into coordinates opens the data up to new research questions and enables researchers to take a bird’s eye view of the material by, for example, comparing the spatiality of different texts, sources, or genres.

We want to end with a few thoughts on some of the practical considerations we had when building our first digital humanities resource. As newcomers to digital humanities research it was hard to find people with whom to discuss theoretical, methodological and practical concerns of managing a digital humanities project. Modeling data in a way that works with the chosen technical solution, scope of the project, and making it in some way reusable by other resources or projects was a new kind of challenge. The spatial humanities are a relatively new area of investigation in Sweden and while we did find inspiration and help in, for example, the Digital Atlas of the Roman Empire[20] and the Digital History workshop this blogpost originated from, those kinds of connections and networks take time to build. But time is often in short supply when starting a project.

Luckily for future endeavors, a lot has happened since we started out in the spring of 2017. There is a new research proposition from the government,[21] which emphasizes digital methods and digital humanities, and there have been several seminars and workshops dealing with digital infrastructures and methods in addition to digitization.[22] More projects with spatial humanities components have received funding, such as Mapping Lived Religion - medieval cults of saints in Sweden & Finland.[23] There have also been developments when it comes to institutional support for us here at Uppsala University. There is a new digital humanities research network, which formalizes earlier networks with a dedicated research leader, Anna Foka. The university is also taking steps to create a plan for maintaining research data and infrastructures. The latter has been the big uncertainty for us involved in the project and is also one of the main challenges of digital humanities projects in general. There will always be obstacles for scholars taking their first steps into digital humanities research, but the stronger community and institutional support being developed will hopefully minimize the stumbles.