Over the past few decades, the welfare sector in Sweden has been increasingly exposed to competition. Even though this change has caused an intense debate, the consequences for the workers have gained less interest. The aim of this study is to investigate how the system of customer choice (LOV) in home based elderly care affects the workers’ employment and working conditions. The study draws mainly upon experiences from three larger municipalities in Central Sweden. The source material is primarily in-depth interviews with employees, trade union representatives, employers and local government officials. The study has an intersectional approach, and the analysis also relates to the scholarly debate on quasi markets, rationality, flexibility and precarious employment.

The results show, among other things, that the customer choice model, including the reimbursement system in use to pay the providers, implies structural risks for temporary employment, reduced manning and stress. Since the system does not include any price competition, the providers are supposed to compete on quality. In fact, however, they also tend to compete by reducing labour costs. The reimbursement system also presupposes rigorous planning and increased and individualised (often digitalised) control of the workers. Moreover, the providers seek to maximise the time the workers are in direct contact with the customers/users, which is the time they can invoice. This means less time for transports, personal meetings, occupational health and safety training and so on. The customer-focused rhetoric in this system helps to legitimize this practice.

Another finding is that many small service providers operating within this quasimarket lack collective agreements. The workers can sometimes be subjected to severe abuse, for example through cash-in-hand payment and work in the grey area between regular employment and self-employment. The employers often use workers who are participating in public labour market programs as cheap labour. Since many companies use foreign languages, ethnicity and culture for competitive advantage, workers with an immigrant background are most at risk of being abused. Even though the local authorities have the main responsibility for the elderly care, they strictly maintain that issues regarding employment and working conditions should be handled by the social partners alone. A conclusion is that trade unions, employers and the local governments need to establish a tripartite cooperation in order to combat unfair competition, labour abuse and the undercutting of wages and labour standards. 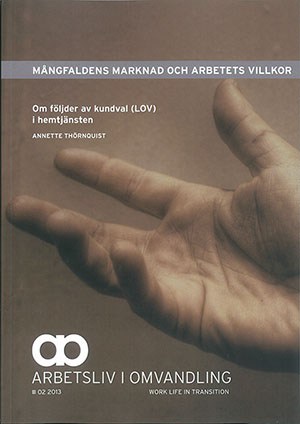