Agnes Branting (1862–1930) was instrumental in reintroducing liturgical colours in the Church of Sweden. She was not alone, but through her position as leader of two major ateliers – Handarbetets Vänner and Licium – she played a key role in transmitting knowledge and interest to the parishes.

Branting was educated in Stockholm and matriculated in 1883 as one of the first two art teachers in Sweden with textiles as specialty. In 1891 she was made director of Handarbetets Vänner (”The Friends of Handicraft”), whose manufacture of church textiles now got off the ground. After a study trip to Germany in 1892, Branting gave a lecture to the Svenska Slöjdföreningen (”Swedish Crafts Society”), which came to form the basis for the subsequent development of sacral textile art in Sweden due to her insistence on five principal liturgical colours. In 1904 she founded the atelier Licium in Stockholm.

A ”restoration of Lutheran paramentics” had been inaugurated in Germany already in 1857 by Wilhelm Löhe. In Sweden, one of the first to interest himself in the matter was U. L. Ullman, bishop of Strängnäs 1889–1927. Ullman wanted especially to promote and im166 prove the observation of the liturgical year in worship. The leading textile artists in Sweden were women who studied both German Roman Catholic and Protestant writings as well as English texts: Hanna Winge, Molly Rohtlieb and Agnes Branting. High Church priests joined the movement which grew steadily, and in 1924 the cathedral of Uppsala, with the approval of Archbishop Nathan Söderblom, ordered vestments in three colours from Licium. Not long before, in 1920, Agnes Branting had published a booklet on ”Vestments in Swedish churches from early times until the year 1900”, where she describes the characteristics and uses of the main colours in a poetic manner.

Ersta was an institution for deaconesses and was strongly influenced by Wilhelm Löhe. It is different from the other ateliers in that it had its own chapel and worship services. By 1901 the chapel had altar frontals (antependia) in four of the major colours: red, green, black and white (purple was added in 1923). Ersta had intimate ties to HV. However, Göteborgs paramentverkstad, which was only active until 1897, was the first to manufacture altar frontals and pulpit cloths in all the five liturgical colours.

My inventory of liturgical textiles manufactured 1880–1930 reveals when the conscious alternation of liturgical colours took hold in the Church of Sweden. Throughout this period, the colour red dominates. This had for long been perceived as the most festal colour. What one has to look out for is the production and sale of white and green. The earliest white altar frontals were made by Göteborgs paramentverkstad in 1892 and 1897, for Falkenberg and Uddevalla respectively. After that, it was new churches in Stockholm that ordered white: Matteus in 1904, Gustaf Vasa in 1906.

Chasubles only began to be produced by Swedish ateliers again around the year 1900. The first were red and violet. Gustaf Vasa Church in Stockholm got a white chasuble in 1906, Storkyrkan (”The Major Church”, became the cathedral of Stockholm in 1942) got one in 1907 and St. Jacob in 1912. In Malmö, St. Petri Church bought a white chasuble from Licium in 1910. It was young High Church priests who acquired the first white textiles.

When the church of St. Lars in Linköping ordered chasubles in all the five colours from Licium between 1926 and 1932, correspondence reveals that the donor, Henric Westman, still regarded red as primarily a festal colour, not a colour specifically for Pentecost and the celebration of martyr saints.

Blue was introduced late, even though Löhe already in the 1850s had advocated it as an alternative to black on certain days. The priest Samuel Gabrielsson mentions in a letter 1921 to Agnes Branting that he used blue during Lent and Advent, but it was not really adopted as an alternative to violet until the 1930s. Licium produced only five blue altar frontals before 1930, made for baptismal altars.

Knowledge about the meaning and significance of the liturgical colours was disseminated to both priests and textile artists through lectures, articles and brochures starting around 1890. Why this happened or why Agnes Branting early became active in the movement is hard to say. It is clear that the influence from Germany and England was considerable. It is also clear that the use of liturgical colours was well established long before Gustaf Lindberg and Gunnar Rosendal published their influential books on the liturgical year (in 1937 and 1940, respectively). Nowadays the liturgical canon of colours is thoroughly rooted in the Church of Sweden as a whole. 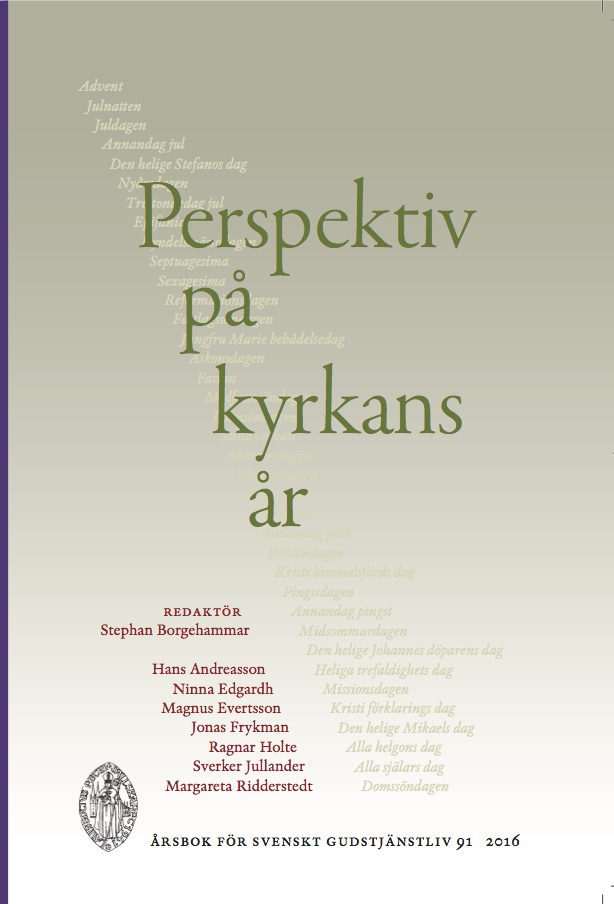