The Swedish Church Service Book notes that “The Funeral is part of a process which encompasses the course of events from the death-bed to the farewell at the graveside”. Parts of this process consist of the priest’s contacts with the bereaved household prior to the funeral service. It is the form and content of these conversations which are focused by this article, entitled Conversations before the Funeral—A Study of the Church’s Practice in the 1990's.

By way of introduction two views of the contacts between the priest and the bereaved household are reported. One view is expressed in an Episcopal Letter on Death and Funerals, addressed to the priests in 1988. The bishops stress how important it is that the priest makes contact with the bereaved family as soon as knowledge of the death is received, and that during these conversations the priest might go beyond the practical details about the funeral and be prepared also to touch on existential issues and faith issues in the widest possible sense. The second view emerges from the material which is available at the undertakers’ parlours. There it is said that it is usual that a priest and the bereaved family are in touch before the funeral, but it is also stressed that the purpose of this contact is primarily to settle practical matters such as the choice of hymns etc.

Evidence from the bishops’ ministerial reports, given at the clergy conferences which take place every sixth year in each diocese, shows that conversations between the priest and the bereaved family prior to the funeral began to be frequent during the 1960's, and during the 1970's became more or less part of regular practice. This view is further supported by those questionnaires which vicars in all the parishes of the Church of Sweden sent to the Archive of Church History in Lund. At the mid 1970's, 75 percent of the parishes reported that the priest and the bereaved family “usually” spoke to each other prior to the funeral. The practice of these conversations prior to the funeral service seems to have spread from the Stockholm area, first to other parts of central Sweden and then to the rest of the country. It took a long time for this practice to become the norm particularly in the Diocese of Gothenburg but also in other parts of Western and Southern Sweden. According to a questionnaire from the mid 1980's, these conversations took place prior to most funerals in almost every parish in the country, and the same high level emerged from an investigation at the mid 1990's. The general weakening in church attendance which had taken place bet these two investigations is not noticeable with regard to the practice of conversations prior to the funeral.

The article is primarily based on material gathered in 1997, in which all priests engaged in parochial ministry in the Church of Sweden were asked to describe the next funeral at which they were to officiate following the receipt of the questionnaire. 75 percent of the priests returned the form. The material which consists of more than 2 200 descriptions of funerals seems to be highly representative. The priests say, almost without exception, that they had contact with the bereaved family before the funeral service.

However, the form taken by this conversation vary greatly. In not quite 20 percent of the cases, the contact only took place over the telephone, which means that the normal form of contact was a face to face conversation. In the overwhelming number of cases (60 percent), the priest visited the bereaved family in their home, but in 20 percent of the cases the conversation was held in the localities belonging to the parish. The information on the questionnaires about these conversations is analysed in four categories: 1) diocese and type of housing area, 2) who was the priest, 3) who was the deceased person, and 4) who were the bereaved persons.

Home visits are less common in the Dioceses of Stockholm, Gothenburg and Lund, i.e. in those dioceses where the major cities are located, than in other dioceses. Conversations in the parish’s localities are particularly common in the Diocese of Stockholm, whereas, particularly in the Diocese of Gothenburg, the contact is limited to a telephone conversation. Besides these differences, the type of housing area has no particular bearing on the form chosen for conversations prior to funerals. Nor do the characteristics of the priest, such as official rank, sex, or age influence the form for the funeral conversation in any particular degree. Contacts between the priest and the bereaved family in the home of the family are particularly common when the deceased is a young or middle-aged person, whereas the conversations often take place in the parish’s localities or on the telephone when it is a very old person who is to he buried. If the bereaved person is a spouse of the deceased, home visits are much more common than if the bereaved family are children of the deceased.

Nor is it possible to settle that any external characteristic of the priest, such as age, sex, or official rank, has any particular influence on the content of the funeral conversations. It is however quite clear that the younger the deceased persons, the deeper the dimension of these conversations. Nor does the degree of interest in the Church shown by the deceased person govern the conversation in any particular way: it is equally common to discuss matters of faith and existential issues in cases where the deceased person has not taken any interest in the Church as in the cases where the deceased has been very actively interested in the Church. In a table towards the end of the article, an attempt is made to show simultaneously the importance of a number of factors, and the most important result is that the conversations between the priest and the surviving spouse and between the priest and the children of the deceased person do not differ very significantly, even though it concerns people at very different stages of the life cycle. The final result of all analyses is that the content of the conversations held prior to funerals is not in any significant degree governed by such external factors which can be measured by an investigation using questionnaires with fixed answers.

The material which has been made available by priests answering questions about one particular funeral shows convincingly that the form and the content of the funeral conversations are more in line with the view on how they ought to be conducted which the bishops expressed in their pastoral letter than with the view represented by the undertakers. At a time when church attendance and the customary position of the Church is in many aspects being weakened, the conversations between priests of the Church of Sweden and the bereaved relatives prior to the funeral service appear to be a recently introduced practice which is able to fill many important functions. 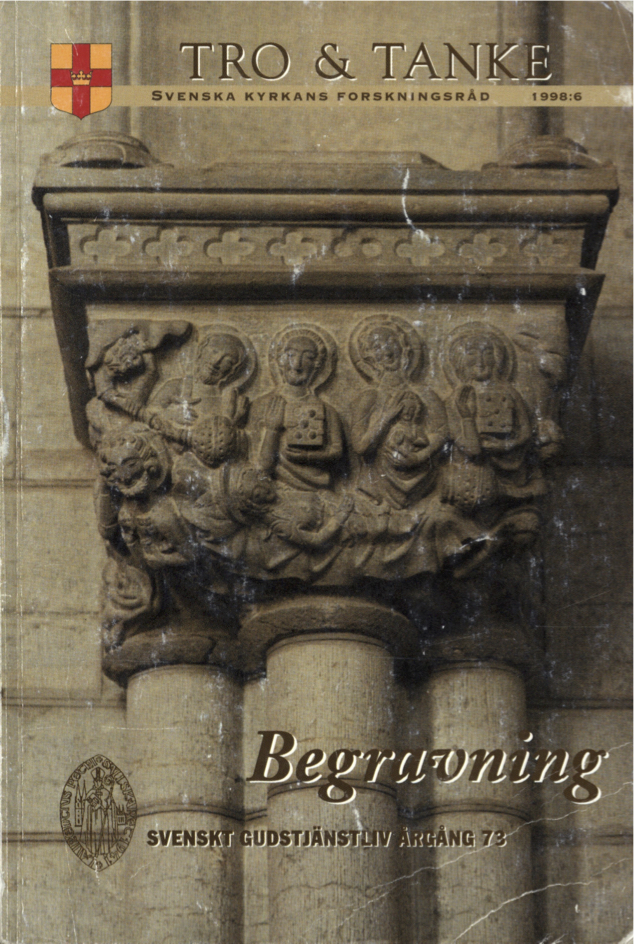