Christian Baptism – and is there any Original Sin?

The traditional doctrine of original sin is currently being debated in the Church of Sweden, together with reflections of this doctrine in the baptismal liturgy. Specifically, the prayer of liberation in the rite of baptism – a modern form of the exorcism – has been called into question.

If we study baptism in the New Testament, we find that John the Baptist emphasised ethics and conversion. His baptism was a preparation for the Kingdom of God that was to come. With Jesus, the Kingdom of God arrives and baptism becomes the entrance to it. At the same time, the Kingdom remains hidden in the person of Jesus. His life forms a pattern which his disciples are called to participate in. His baptism in the Jordan inaugurates his ministry, which culminates in his death and resurrection. Similarly, his disciples are ‘born again’ in the act of baptism; live lives of participation in the Kingdom of God, which may be described as daily ‘dying and rising with Christ’; and in a final rebirth following their physical death enter fully into the Kingdom.

It is important to note that the New Testament only deals with adult baptism. The adults who are baptised have repented and confessed their sins. Their ‘rebirth’ is easily understood as a ‘death’ to a previous life and the beginning of a new one. As time passed, however, it became normal to baptise children; and even though infants have no previous life to die away from, or sins to be forgiven, the ritual with its expressions of sin and repentance remained unaltered. Instead, theology was adapted to fit the ritual: baptism was said to be needed in order to free the infant from the guilt of original sin.

No thought of inherited sin or guilt can be traced in the teaching of Jesus. Paul’s words in Rom. 5 about how sin entered the world “through one single man”, which then led to death for everyone, are hard to interpret. Nevertheless, it is clear that he does not speak of any inherited sin or guilt, but rather of an inherited propensity to commit sin as well as of a participation in sinful humanity. The Swedish theologian Gustaf Wingren translated this as “inheriting a store of destruction”.

The Western doctrine of original sin was first formulated by St. Augustine. Augustine and his followers, such as Thomas Aquinas and Martin Luther, emphasised that original sin involves a depravation of the will. When speaking of baptism, Luther stressed its connection with faith, which may be present in rudimentary form in the infant. The effect of baptism is, according to Luther, a constant ‘killing of Adam’ and a concomitant ‘resurrection of the new man’ accompanied by a growth in faith. Luther’s thought contrasts favourably with Melanchthon’s in Article 2 of the Augsburg Confession. The idea expressed there, that infants deserve damnation for being unable to fear and trust God, is horrifying. Although Luther, too, formally subscribed to this view, he elsewhere said that he did not believe that children who died before baptism due to unfortunate accidents would be damned.

We need to distinguish between inherited sin, inherited guilt and an inherited propensity to commit sin. Throughout history, humans have shown a double tendency: a social, constructive one that at times deserves to be called love of neighbour, and an asocial, destructive one. Classical theology speaks of iustitia originalis and peccatum originale. Both propensities are inherited but they are also highly dependent on the environment in which the individual lives and develops. Infant baptism should be seen as a means of furthering the infant’s positive development. This would motivate the inclusion in the ritual of a prayer not of present but of future liberation from sin and destructiveness.

Einar Billing, the Swedish theologian and bishop, saw baptism above all as an expression of prevenient grace. His reflexions tended to a more open understanding within the Lutheran tradition of the relation between baptism and salvation. He did not give up the doctrine of original sin but suggested that the purpose of infant baptism was primarily to administer grace and to provide entry into the shared life of the Church.

In a recent doctoral dissertation, Anna Karin Hammar suggests the alternative of seeing baptism as a first step in the liberation of creation: it would then be a rite of thanksgiving for the infant as a fruit of creation, an act of blessing and of prayer. Further, she wishes to replace the idea of inherited sin with the idea of an inherited responsibility for the common human situation. My question is: what does either of these have to do with infant baptism? A new-born child cannot take responsibility, any more than it can be held accountable for its lack of knowledge and of faith. When an adult is baptised responsibility may be emphasised, but it should then be formulated as something individual and manageable, not as an abstract responsibility for the total human situation. Equally unconvincing is Hammar’s attempt to formulate a more inclusive view of salvation by connecting baptism to the covenant of Noah. After all, the majority of all living beings were killed in the Flood.

Work on a new Handbook for the Church of Sweden is in progress. Since it involves revision of the baptismal liturgies I wish to present two major desiderata: (1) A greater distinction between the rites for infant and adult baptism. In the New Testament, adult baptism is always connected with repentance and forgiveness. While the rite for adult baptism should begin in a way that expresses this, the rite for infant baptism should only express the future possibility of forgiveness. (2) The current prayer of liberation cannot simply be removed without a serious loss of substance. On the contrary, the rite needs to be specific about the dangers involved in human life. In the rite for infant baptism, however, this prayer should point to the future and invoke the promise of future forgiveness. 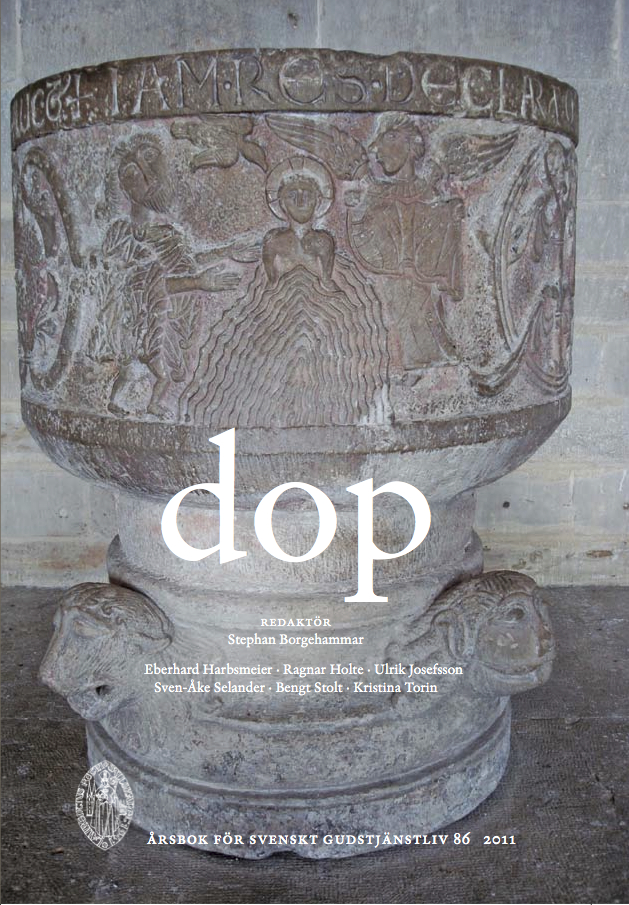