The Holy Scriptures do not prescribe how a marriage is to be contracted, but they do provide direct and indirect glimpses of how a wedding was solemnized in the time of Jesus. The biblical accounts were translated into pictures by folk painters, who depicted the biblical weddings in accordance with their own popular customs. The rhetoric of the wedding ritual was also spiced with biblical allusions.

Neither upper-class weddings nor bourgeois weddings have received the same attention as peasant weddings. Ethnographical literature contains numerous descriptions of the church weddings of the peasantry, and weddings have a central position in music, poetry, and painting, as well as in popular comedies and children’s games.

A number of unwritten rules must be followed at a wedding. These are manifest in customs or traditions passed on from generation to generation. In our times, when a wedding is not associated with the Sunday service and public control, people instead consult etiquette books or weekly magazines.

Contracting a marriage required not only sexual maturity (for reproduction) but also cultural competence. The man was supposed to have attained a social position, and the engagement was protracted, especially in bourgeois circles. The men were often much older than the women when they married, which led to the rise of different rules for male and female morality.

Weddings were prohibited during Lent, the fasting season. It was common to hold them at times when there was plenty of food in the house. Nowadays they are often timed to coincide with holidays, so midsummer is a common time for weddings, and July has more weddings than any other month.

The tendency of the nobility and the upper bourgeoisie in the seventeenth century to mark their distance to the common congregation meant that weddings were held in the home instead of the church. This practice later spread to other strata of society, but not to the common people, who continued to marry in church or in the parish registry office in the vicarage, where there were less stringent demands about clothing than in the church.

A wedding is a rite of passage. The first stage is a farewell to an earlier way of life, with its greater freedom to socialize. Hen parties and stag parties mark this separation. Marriage in Sweden was based on the two parties themselves reaching an agreement. Among the upper classes and in the socially stratified south of Sweden, however, parents could try to achieve strategic marriages. In formal terms, a marriage was contracted when the man and woman, in the presence of their families and relatives, shook hands and exchanged gifts as a pledge of the union. The church, however strove to postpone the cohabitation of the couple for reasons of canon law. A marriage required control of the parties’ entitlement to marry and demanded Christian knowledge, since the wedding ceremony was associated with communion. The publishing of the banns, preceded by an examination, was one such control station.

The church used various signs to try to separate the virtuous from the wicked. The bridal crown was reserved for intact virgins, whereas "illegitimate" brides could be made to wear a red "whore’s kerchief1  (horklut). There was less shame attached to this in northern Sweden, however, where an illicit liaison was often legalized, unlike the socially stratified southern Sweden, where a man rarely married a woman whom he had made pregnant outside wedlock.

Church weddings still have a strong position in Sweden, perhaps partly because they constitute a full legal marriage, with no need to be preceded by a civil ceremony as in many other countries. Family traditions also play a major role. In recent times large church weddings - after the anti-festive trend of the 1970s - have once again become popular. The wedding reception, which is often held in a restaurant or other public place, has nevertheless become less formal. Many ceremonies from earlier times have been abandoned or changed. Wedding gifts in the form of cash have been replaced by presents, as at birthdays. Apart from the immediate family, the guests mostly consist of the couple’s friends. Whereas it used to be common in both town and country for the bride to show herself in her wedding finery to outsiders, a similar funciton is now fulfilled by wedding photographs in the newspapers. Whereas the bride and groom used to be escorted into the wedding chamber, the couple now often sneak away from the wedding to go off on their honeymoon. The wedding night has lost its drama, and the couple’s need for privacy is respected. It is only on the wedding day that the "estate for matrimony" receives any ritual marking. Since Swedish women have now begun to abandon the custom of wearing two gold rings, there are no symbolic ways to distinguish married from unmarried. 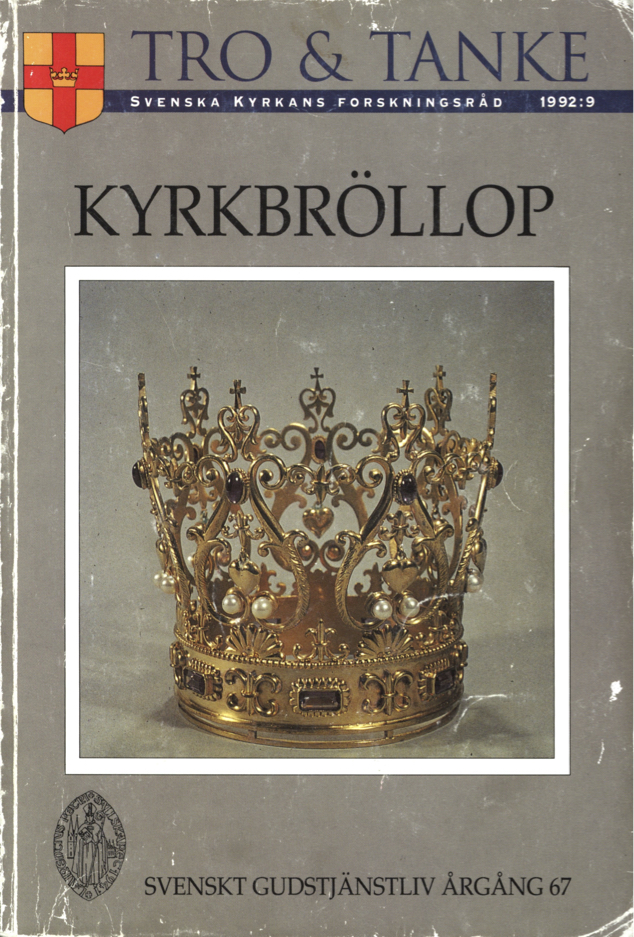