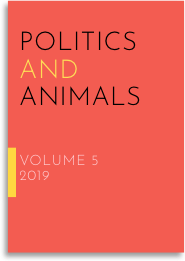 Restoring the “Appropriate Relation”: Human and Nonhuman Species Treatment in the Wake of Hurricane Katrina

Hurricane Katrina devastated parts of New Orleans, trapping a large population of humans and companion species in the flood zone. In relation to the rescue efforts, controversy arose about the treatment of persons of color and the protocol excluding companion species from evacuation and rescue. Examples from media are used to illustrate how Agamben’s “state of exception” and Mbembe’s “necropolitics” emerge from the background into full visibility with species treatment in the flood zone. Normative human and nonhuman animal differences dissolved by the water into a zone of indistinction require symbolic repair to restore what Harriet Ritvo calls the “appropriate relation,” as it applies to both nonhuman animals and humans of color vis-à-vis dominant and exclusionary conceptions of the human. Media coverage during and after the event illustrates the ways the discursive relation between human and nonhuman animals is reconstructed as a strategy of re-memberment. This raises questions beyond this specific case about inter- and intra-species treatment based on Western (European) philosophical distinctions of the animal and human, and how intolerance toward pollution of inter-species mixing, made manifest in the flood zone, calls for a dismemberment of value over against the continuous reproduction of difference.