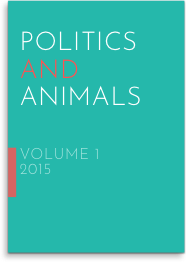 Politico-Moral Apathy and Omnivore's Akrasia: Views from the Rationalist Tradition

Awareness concerning the moral status and treatment of nonhuman animals has risen exponentially in the past few decades. Yet many of those who rationally note the unjustifiability of practices such as industrial animal farming continue to support those practices with their own life-styles. The paper investigates this perturbing obstacle to the spread of animal politics from the perspective of akrasia. Akrasia is an old philosophical paradox, within which one knows x to be true, and yet willfully acts against x—here, attention will be on "omnivore's akrasia," a state within which one voluntarily consumes products which one deems to have been produced with immoral means. Emphasis will be on depictions of akrasia offered by rationalist philosophers—Plato, Spinoza, and Descartes—who all accentuated misled emotions, wants, and desires, together with a lack of self-control and cultivation, as the primary sources of akrasia. Moreover, these philosophers brought forward the relevance of external influence and habit, together with cognitive defects, and suggested that akrasia can be overcome not only via self-control (Plato), but also through the cultivation of inner emotions and joy (Spinoza) and generosity (Descartes). It will be suggested that many aspects of omnivore's akrasia, ranging from hedonistic impulsivity to political apathy, can be explained via the qualifications offered by the rationalist school. Furthermore, the paper claims that if omnivore's akrasia were to become less commonplace, animal ethics and advocacy would greatly benefit from offering the type of moral arguments that underline the links between reflective cultivation, joy, and generosity.