Female Citizenship and Family Law in Kuwait and Qatar: Globalization and Pressures for Reform in Two Rentier States 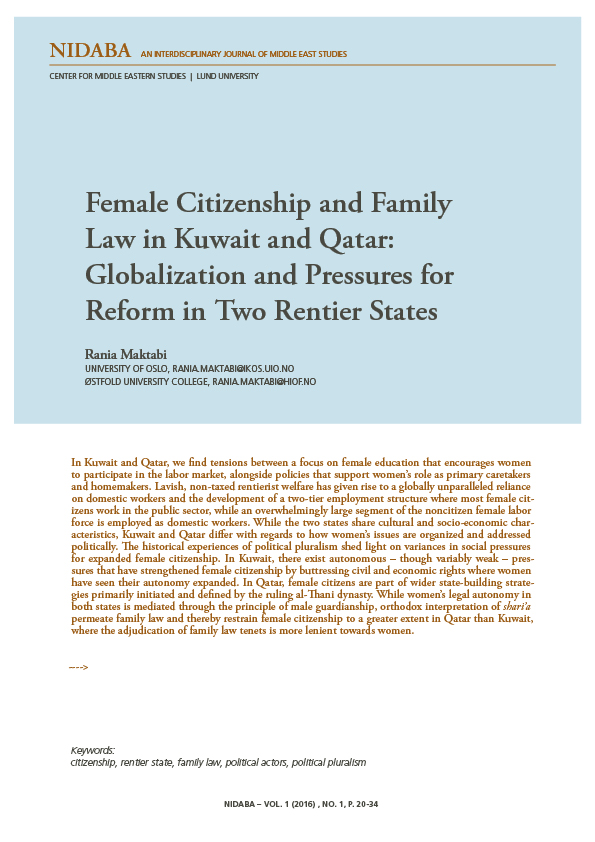 In Kuwait and Qatar, we find tensions between a focus on female education that encourages women to participate in the labor market, alongside policies that support women’s role as primary caretakers and homemakers. Lavish, non-taxed rentierist welfare has given rise to a globally unparalleled reliance on domestic workers and the development of a two-tier employment structure where most female citizens work in the public sector, while an overwhelmingly large segment of the noncitizen female labor force is employed as domestic workers. While the two states share cultural and socio-economic characteristics, Kuwait and Qatar differ with regards to how women’s issues are organized and addressed politically. The historical experiences of political pluralism shed light on variances in social pressures for expanded female citizenship. In Kuwait, there exist autonomous – though variably weak – pressures that have strengthened female citizenship by buttressing civil and economic rights where women have seen their autonomy expanded. In Qatar, female citizens are part of wider state-building strategies primarily initiated and defined by the ruling al-Thani dynasty. While women’s legal autonomy in both states is mediated through the principle of male guardianship, orthodox interpretation of shari’a permeate family law and thereby restrain female citizenship to a greater extent in Qatar than Kuwait, where the adjudication of family law tenets is more lenient towards women.

Authors retain copyright and grant the journal right of first publication with the work simultaneously licensed under a Creative Commons Attribution License that allows others to share the work with an acknowledgement of the work's authorship and initial publication in this journal.
Authors are able to enter into separate, additional contractual arrangements for the non-exclusive distribution of the journal's published version of the work (e.g., post it to an institutional repository or publish it in a book), with an acknowledgement of its initial publication in this journal.
Authors are permitted and encouraged to post their work online (e.g., in institutional repositories or on their website) prior to and during the submission process, as it can lead to productive exchanges, as well as earlier and greater citation of published work (See The Effect of Open Access).

The journal provides open access to all accepted manuscripts in hopes of facilitating an exchange of knowldge and informed discussion about the Middle East. Publishing with Nidaba, authors agree to the terms of the Creative Commons Attribution-NonCommercial-NoDerivatives 4.0 International License, which allows others to share the work with an acknowledgement of the work's authorship and initial publication in this journal. Authors retain the copyright to their manuscript and grant the journal the right of first publication.